“Does corona offer a level playing field?” or in other words “Is one population group more affected by corona than another?”
Covid-19 appears to be hitting people of ethnic minority background more often. Does the coronavirus discriminate? And if yes, what explanations are conceivable?

EFPC Executive Board member Prof Maria van den Muijsenbergh shares her expertise in the large Dutch newspaper “The Volkskrant” on this toxic topic making clear that populist rhetoric is not based on evidence.
Part of her explanations, which are based on real evidence, are:

She ends with stating: I heard many times the argument that migrants come together much more often in large groups and that would explain why the virus hits them harder. “It will certainly play a role, but it is no bigger than with the protestant religious groups in Staphorst who go to church or with young people who want to party. “She knows enough Imams (Muslim religion leaders), who ask people not to come to the mosque but to organize the prayer online.”

Please have a look at the full translation of the Volkskrant article with the input of Maria.

Full translation of the Volkskrant article 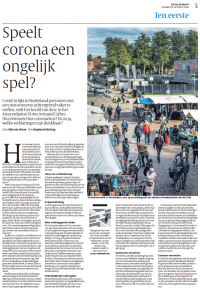